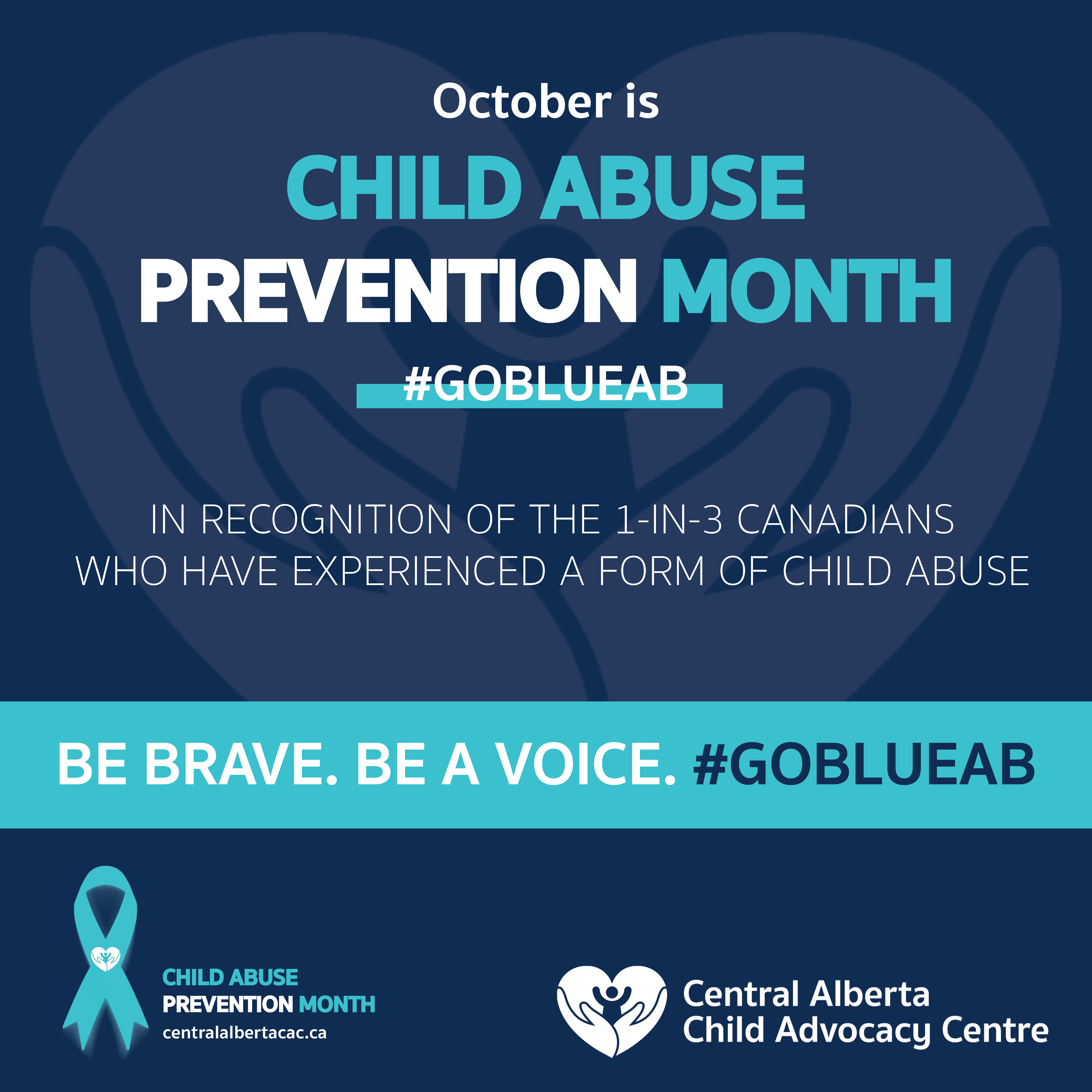 Since opening its doors in late 2017, the CACAC has supported over 2,000 children and youths from the Central Alberta area, servicing 91 communities and counting. So far in 2022 they’ve triaged nearly 400 children and families, and are seeing a rise in online exploitation (*stats as of August 2022).

“Each year the community gets more and more involved in what we do here at the CACAC, and we couldn’t be happier to see it. But in many ways, we’re only just getting started. The need for wrap-around services, for forensic interviews, for court prep, and for getting these kids the help they need is growing daily. We’re seeing it in our schools, we’re seeing it in the rural communities, and we’re seeing it on all economic levels. That’s why in October we encourage schools and businesses to get involved by going blue to spread awareness for our cause. The more that people understand the issue, the more we can flip from reactive responses to preventative ones – and it all starts with awareness.”

Child Abuse Prevention Month is observed across Alberta, with other provincial Child Advocacy Centres also seeking to spread awareness in their respective jurisdictions. These Centres – including the CACAC – are safe spaces where children and youths who have experienced some form of child abuse can tell their story, and/or get connected with necessary services. The goal is to avoid re-traumatization by aiming to have the child tell their story as few times as possible – ideally only once. At the CACAC, these statements are recorded during a forensic interview, and can be used later during court proceedings.

“This is the fourth year that the CACAC is running the #GoBlueAB initiative, and this year we’re looking to make a blue wave across all of Central Alberta! By using the hashtag #GoBlueAb, and tagging the CACAC (@CentralABCAC on most platforms) we can foster a major online movement that spreads awareness further. We do this in conjunction with CACs across the province. On October 24th, we encourage you and your team, or your friends and family, to wear blue and join the movement! Together we can make a stand against child abuse here in Central Alberta.” –

On October 24th, the CACAC invites you to #GoBlueAB in recognition of Child Abuse Prevention Month. By wearing blue, we can raise more awareness about the prevalence of child abuse in our communities and how we can take action to prevent it. Want to get your school or workplace involved? Wear blue from October 24th – 28th and tag the CACAC on social media @CentralABCAC and use the hashtag #GoBlueAB!

If you or your company/organization would like to get involved in the corporate challenge, or if you’d like to host your own #GoBlueAB event, you can reach out to CACAC Community Development Coordinator Jodie Jamieson at jjamieson@centralalbertacac.ca, or call directly at 587-272-2233. To learn more about how to recognize child abuse and how you can help those in your community visit www.centralalbertacac.ca.

Here is a list of public events happening throughout October that you and your family can attend to support the #GoBlueAB movement! You can support the CACAC at any of these events by making a donation, and by picking up your Child Abuse Prevention Month awareness ribbon. Event dates include:

*Due to unforeseen circumstances, the Red Deer Vipers game has be cancelled. This game will be rescheduled for later in the month*

The  Vipers are leaving it all on the green to support our kiddos!

The CACAC Breaks Ground on the Centre of Excellence

Get In Touch Get Help Today